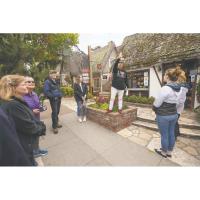 As Gael Gallagher leads small groups of visitors around Carmel-by-the-Sea, she seems just as delighted as her guests to explore a star of the hamlet’s wonders: the some fourdozen hidden courtyards, passageways and picturesque alleys that lace through this one-square-mile hideaway that was developed as an artists’ colony after San Francisco’s 1906 earthquake.

She moves briskly across the downtown’s cobblestone streets and up and down the sloping residential roads, excitedly pointing out all kinds of prettiness including a secret garden with fountains and a geodesic dome, tucked-away art galleries and storybook Comstock cottages peeking from behind lavish utopias of flowers and trees.

As a Monterey resident for more than four decades, she calls herself a combination of “tour director, naturalist and historian,” describing the local foliage as easily as the works of the late architects Bernard Maybeck and Charles Sumner Greene, or the lore of famous former residents like Clint Eastwood and Doris Day.

“Every footstep is a treasure,” she said.

Through the two-hour stroll, we stop in to meet the proprietors of charming restaurants and wine tasting rooms (enjoying snacks and sips, of course), then pause to admire fascinations like the 1927 Tuck Box restaurant that looks like a Grimms’ Fairy Tales showpiece with its undulating roof, wavy brick chimney and tree trunk style front door.

One of Gallagher’s favorite secret spots is the Frank Sinatra Room at Pèpe’s Little Napoli Bistro Italiano on Dolores Street, she said. That’s because Napoli owner Rich Pèpe grew up in Hoboken, New Jersey with the Sinatra family — Frank’s mother was a midwife, and delivered numerous Pèpe family members. The room brims with vintage photos, and Pèpe is always on hand to share the stories with diners feasting on Jackie-O pasta draped in pink vodka sauce, pancetta and peas.

Gallagher also encourages us to customize our itineraries, if something catches our fancy.

That’s how we end up visiting City Hall to get our free permits to wear high heels — the Carmel Municipal code bans wearing shoes with heels more than two inches tall, put into an unenforced law in 1963 to defend the city from being sued if wearers of rickety spikes trip over the village’s irregular pavements distorted by tree roots.

For other adventures, Gallagher hosts walking tours of Monterey Bay to visit landmarks like the local aquarium and Cannery Row, plus driving tours of the Monterey coast.