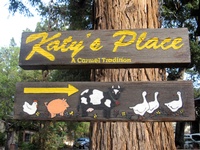 If any Carmel restaurant deserves the term ''icon,'' it's Katy's Place. This gem was created in 1982 by well-known restaurateur Katy Curry and purchased seven years later by current owner Randall… read more