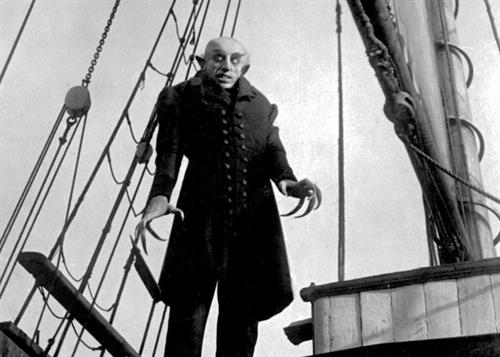 Get into the spooky Halloween spirit with the classic silent film Nosferatu the way it was intended to be seen, accompanied by a live orchestra! Released in 1922, Nosferatu is considered one of the most foreboding and influential horror films in the history of cinema. In this first-ever screen adaptation of Bram Stoker's Dracula, what is supposed to be a simple real estate transaction leads an intrepid businessman deep into the heart of Transylvania, and the castle of the otherworldly Count Orlok, portrayed by the legendary Max Schreck in a performance which has spawned its own mythology. But is the Count just the wealthy eccentric that he appears to be or something much more sinister?

This cinema classic is accompanied live by the twelve piece Peacherine Ragtime Society Orchestra, hailed as "the premier American ragtime orchestra" by the Washington Post. Formed by conductor Andrew Greene in 2010, the orchestra recreates the syncopated stylings of a bygone era – ragtime, theatre, and dance music, along with underscoring classic silent films using the original orchestral scores, and has performed at numerous leading venues, including The Kennedy Center, the Library of Congress, and the American Film Institute. Travel back to the roaring 20s with us and see Nosferatu as it would have been screened originally, with its hauntingly beautiful authentic musical score, in this performance perfect for music and film fans alike!